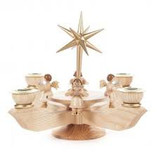 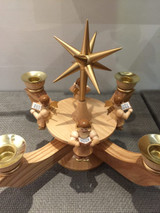 Requires candles with a diameter of 17 mm (sold separately).

The history of Erzgebirge pyramids

$120.00
Erzgebirge Advent Candle Holder Large Natural with Wooden Star Create an enchanting advent display with our authentic advent candle holder. This wooden ornament comes directly from Germany and is a...
Add to Basket
Add to Basket