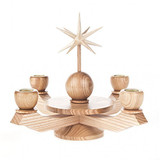 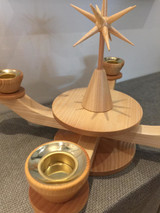 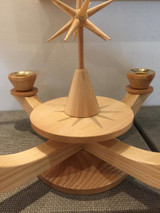 Create an enchanting advent display with our authentic advent candle holder. This wooden ornament comes directly from Germany and is a wonderful focal point during the advent time. Four candles (traditionally red) stand in the circle and each one represents one of the four Sundays of Advent. Traditionally each Sunday 1 of the candles is lit in anticipation of Christmas. Candles are sold separately.

Requires candles with a diameter of 22 mm (sold separately).

We recommend our advent candles in red 22 mm.

The history of Erzgebirge Christmas decoration

$48.00
Glueckskaefer Large Wooden Building Blocks - Natural Building blocks are the foundation of toys for children. They are not only used to build towers but with some imagination they can be used as...