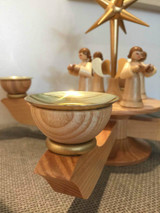 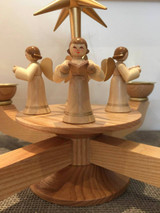 Requires candles with a diameter of approx. 20 mm (sold separately).

The history of Erzgebirge Christmas decorations

$70.00
Ostheimer Large Angel with Star (2 Pieces) A sweet and comforting decoration for a child's room and a pleasant addition to the Ostheimer Nativity scene.Ostheimer Figures are hand-crafted in Germany...
Add to Basket
Add to Basket